All About Red Flag Fleet from WMS Gaming

Red Flag Fleet is the title of a pirate and adventure-themed online video slot created by the software developer WMS Gaming. The game is centred on a crew of oriental pirates who sail the Pacific in search of treasure, and includes plenty of pirate characters and imagery to suit the theme.

Playing out over 6 reels and 192 paylines, Red Flag Fleet offers a unique reel structure, which is a feature of many of WMS’s other online video slot games as well. In terms of bonus features, this game offers a free spins feature with up to 40 free spins on offer, as well as multipliers and stacked wild symbols.

The reel structure of Red Flag Fleet adds a new element to the standard online slot layout, and this game’s reels have been designed to increase in size from left to right, starting at 2 symbol positions in reel 1 and ending at 7 symbol positions in reel 6. A deep blue animated ocean and a matching sky form the game’s background, and a wooden pirate ship is visible to the left of the screen.

An adventurous Oriental soundtrack adds to the game play, and details like the rough wooden structures around the reels and the detailed pirate character symbols help to add to the tone of WMS’s Red Flag Fleet slot.

The reel symbols in Red Flag Fleet are 5 main character symbols, including a female captain pirate and four of her shipmates. Also featured as the slot’s lower paying symbols are the standard playing card symbols J, Q, K and A.

The ship’s female captain symbol also serves as the jackpot payout symbol in Red Flag Fleet, awarding players 10x their bets per line when 5 of this symbol appear on an active payline. 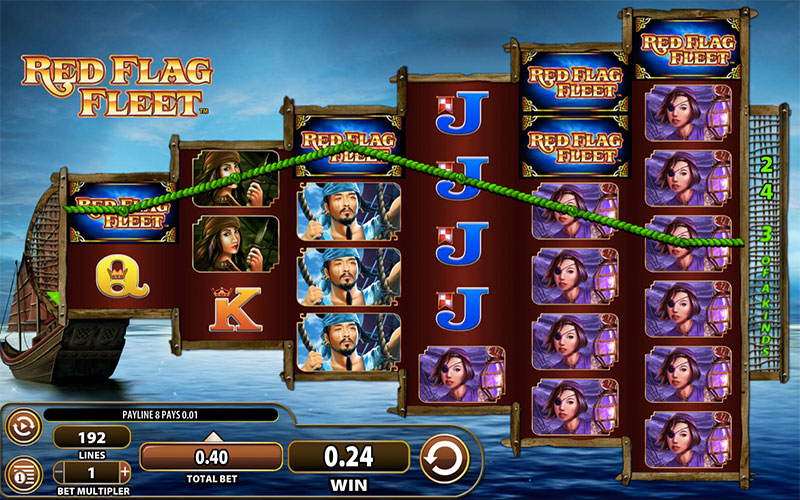 The Red Flag Fleet logo symbol is this slot’s wild symbol, which can substitute other symbols in the game to create winning combinations, with the exception of the scatter symbol. The wild symbol also appears stacked on the reels during the base game and the main feature.

The scatter symbol in the WMS Red Flag Fleet slot is an icon of a pirate ship. Landing 3 or more of these scatter symbols anywhere on reels 2 to 6 will trigger the free spins feature.