Gumball 3000 is an online slot game based on the annual international celebrity motor rally started by Maximillion Cooper in 1999. This motor rally takes place on public roads and is Cooper’s vision of combining cars, music, fashion and entertainment. There has also been a movie based on Gumball 3000.

Developed by Play ‘n Go Software, exclusively for use by Betsafe Casino players, Gumball 3000 has 5 reels and 15 paylines. Play ‘n Go have done an excellent job of capturing the spirit of this well-known car race and Gumball 3000 is available to players using Flash and HTML5 on mobile and desktop platforms. The graphics are simple and fun and include the playing card symbols. The background of Gumball 3000 is the starting grid and there are the sound effects of cars revving and lively dance music.

To begin playing Gumball 3000 players will need to select the number of paylines, choose a coin value and how much they would like to bet per payline. The main symbols are the cars and the blue car has the largest payout. If 5 blue cars appear on the reels there is a payout of 2500 coins and for 4 blue cars a payout of 500 coins. The green car pays out 500 coins if 5 appear on the reels. The red and yellow cars have a lower payout. The playing card symbols are King, Queen, Jack, Ten and Ace.

The wild symbol is the Gumball 3000 logo which will substitute for all of the other symbols except the bonus symbol to create a winning combination. If 3 wilds appear on reels 1 and 5 players will be awarded with 15 free spins. For the duration of this bonus feature the stacked wilds will remain on reels 1 and 5 while substituting for the other symbols. The bonus game is activated when 3 silver bonus symbols appear anywhere on the reels. Players will need to choose a location, Stockholm, Monte Carlo or Helsinki, and they will participate in the race. Players can win as much as 150 times their bet if they win. 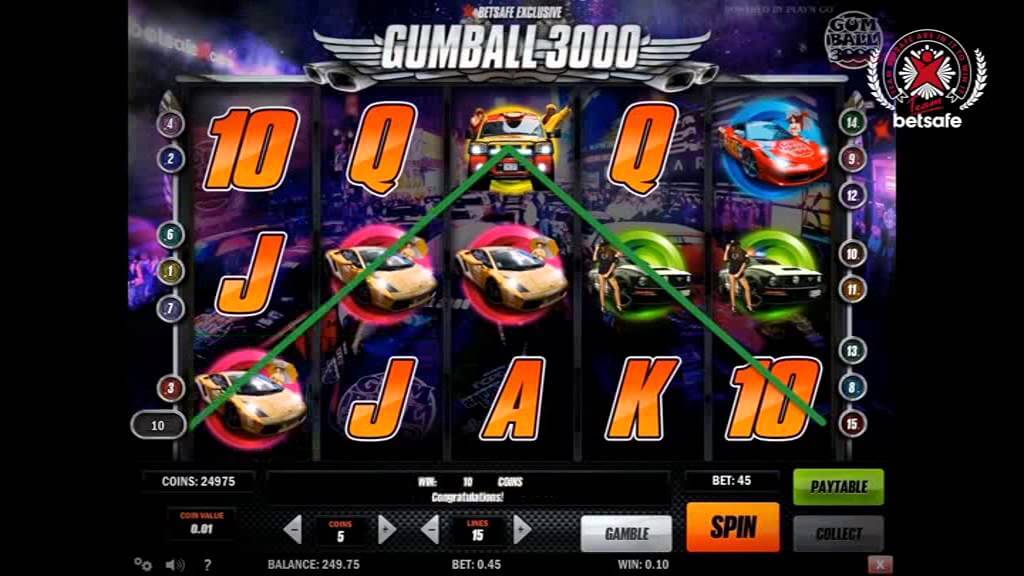 Gumball 3000 also has a gamble feature where players have to choose the suit or colour of the hidden playing card symbol and if they guess correctly players can double or quadruple their win. Guessing incorrectly will result in a loss.

The interface is simple and easy to use and has the following buttons. The coin value allows players to select their coin value and the coins button has a + and – and players can raise or lower the amount of coins they would like to bet. The bet max is to play the maximum bet per payline with the coin values chosen. The paytable will assist players with information about the game and what each symbol and combination is worth. The autoplay button allows the reels to spin automatically for a certain number of spins with the selection the player has made.

Gumball 3000 is one of those themed slot games that will enthrall racing enthusiasts with great graphics and realistic background sound effects and great bonus features with many chances to win.